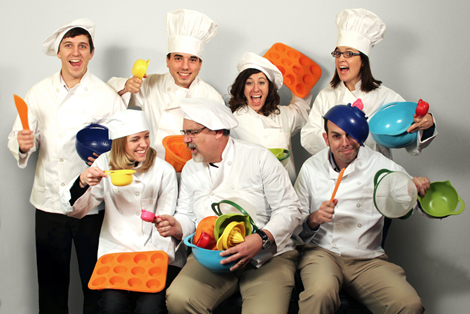 A couple of weeks ago, I got to post some of the work that I did on the CentriKid set for this summer. That’s not all I did for camp this year. I also worked on all the print pieces and animated bumpers.

One of the print pieces that I worked on was the Group leader folder. Essentially, when a church group leader takes their group to camp, they get a folder with everything they need to know: schedule, missions information, etc. The first page in the folder has a picture of the staff that work in the LifeWay office, in Nashville, year round. They spend all year planning, getting site location information, hiring the teams that will work camp, registering churches, determining logistics, etc.

I got to lead the photo shoot. Jeff Venable helped me set up lights and Lydia Campbell helped with props. Darrel Girardier, our creative director gave me an idea of what were looking for. He suggested pulling out the chef outfits and kitchen utensils that would go to camp and have them dress up. This was a great idea, except for the fact that we didn’t have enough outfits for everyone. We ended up taking two pictures and I stitched them together, after the fact, in Photoshop. 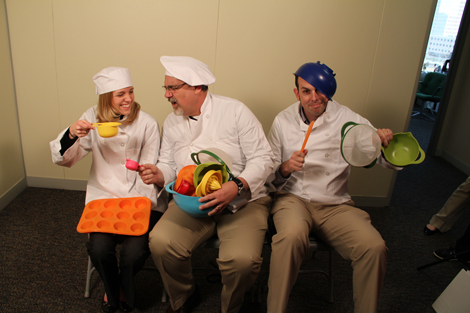 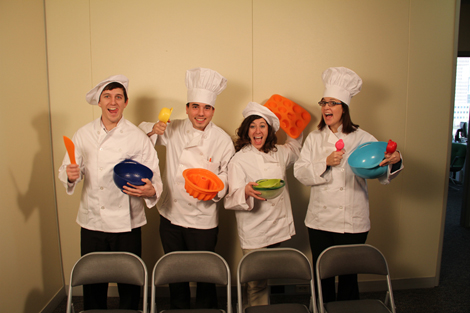 We kept the chairs in the back row picture so that they would know where to stand, hoping it would make my job easier when I got ready to stitch them together. —It did help. The only problem was we actually took the back row picture first. I miscounted, and so we originally had 4 chairs on the front row. Meaning, I eventually had to Photoshop out the extra chair.

The first step was to cut out the front row. 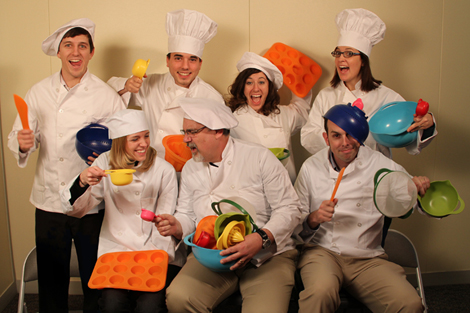 Everything looked dark. So, I created a mask, cutting everyone out, adding highlights, and making their outfits look like a true white.

The cool thing about our eyes is that we recognize white when we’re inside under fluorescent lights or outside in sunlight. The camera is different. When you take a picture outside, it has a blue tint to it, fluorescent adds yellow. You can compensate for this by changing the white balance in your camera or modifying it after the fact, like I did. Most photographers will carry around a white card. Before they start shooting, they’ll hold the white card up, zoom completely in on it with their camera, and adjust the settings, that way the camera will know what true white looks like. Interesting, huh? 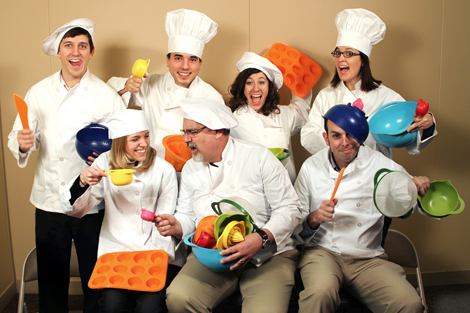 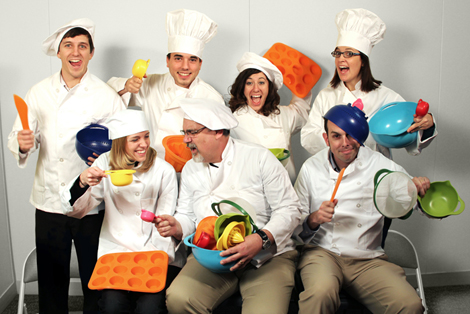 Then, I had to photoshop out the floor and the chairs. The hard part was corner on the left. 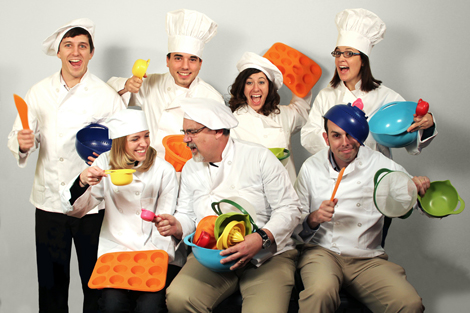 If you look at the picture now, it would probably work. But, the area where our eyes tell us something isn’t right, is lghting and shadows. Watch movies carefully. A lot of places where they mess up in compositing are places where the shadows don’t line up, especially if you’re outside. There’s only one sun. —or at least for the planet I live on.

I added shadows behind the front row and around Eric’s legs, especially on the left side. Remember, I had to paint in his legs?

Here’s the final picture. There are a few places where I can tell, but for the most part? not too shabby.