For the last 4 months, I’ve been cranking out pieces like it’s going out of style. It’s been pretty impressive the amount of work we’ve been able to deliver (if I do say so myself).

One of the pieces that I’ve done recently is for the NOW Conference being held this weekend. Because the way the budget was structured, I was able to do some things that I normally don’t get to do…like letterpress the covers! 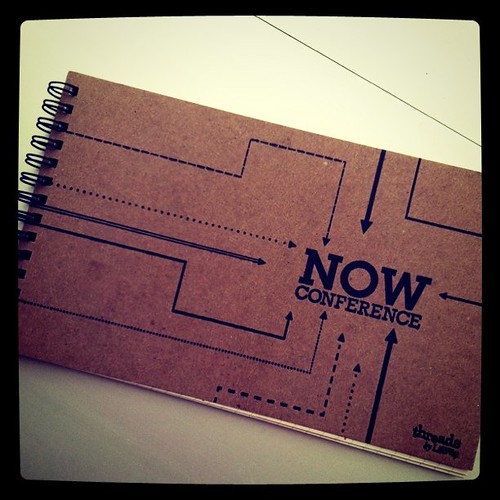 We used a local printer, Isle of Printing, to run the covers. In fact, a couple of weeks ago, we took a field trip to Bryce’s studio. I even got to run one set of the covers. 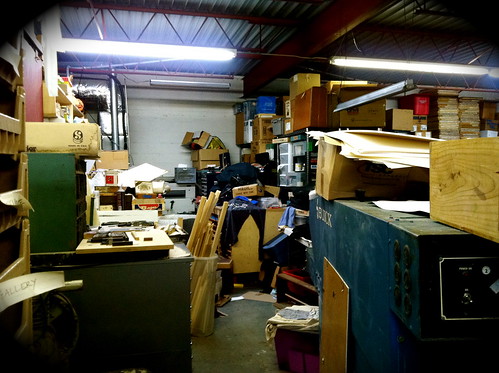 Amidst all this stuff, he had cases and cases of type. He had a couple of different machines. Including, this Original Heidelberg from 1942! 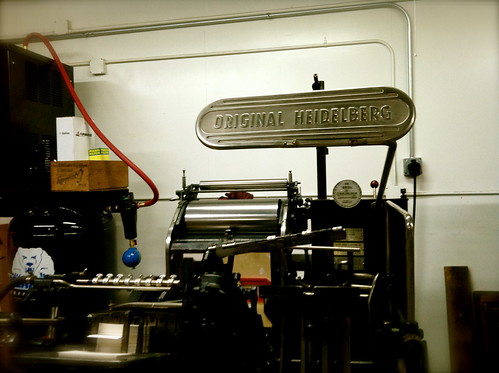 The insides look great too. We wanted it to resemble a moleskine notebook. The format of the conference lended itself perfectly to this concept. It’s 15 speakers in 2 days. Everyone gets 18 minutes on stage. Each speaker gets a spread in the listening guide, with plenty of extra notes pages in the back to use once the conference is over. I ended up turning it horizontal, though, to do something different. 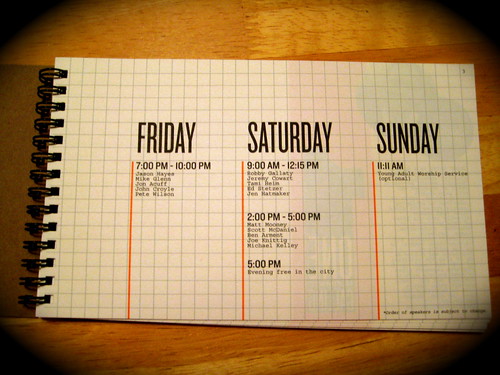 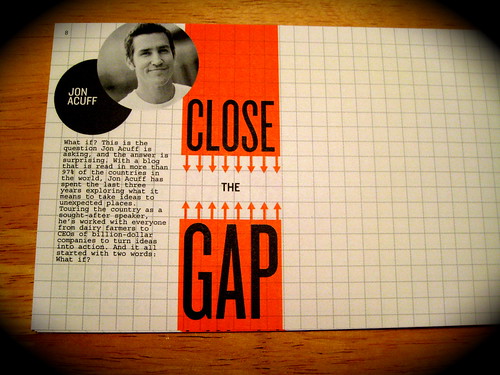 —and because I’m always interested to see other designers’ process. I’ll share these, too. I almost always sketch out ideas and layouts before doing anything on the computer. It’s a habit I picked up in college. I can get a lot of ideas out of my head and onto paper a whole lot faster this way. I can also tell if an idea is going to work, without wasting my time, pushing pixels and forcing a design on the computer. 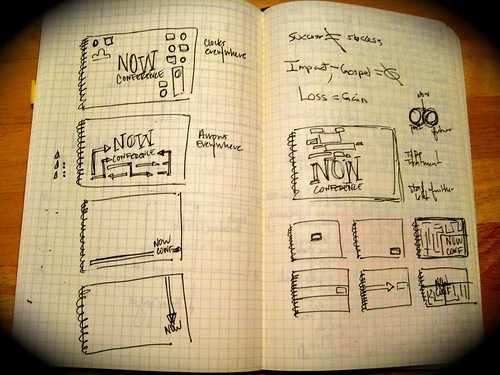 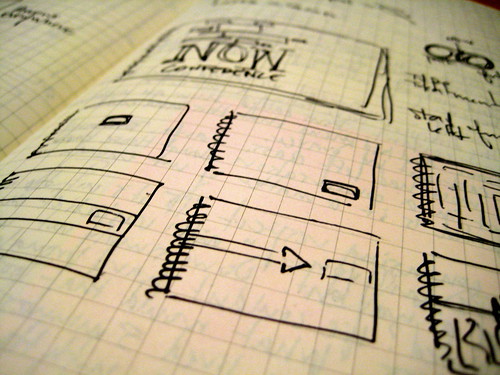 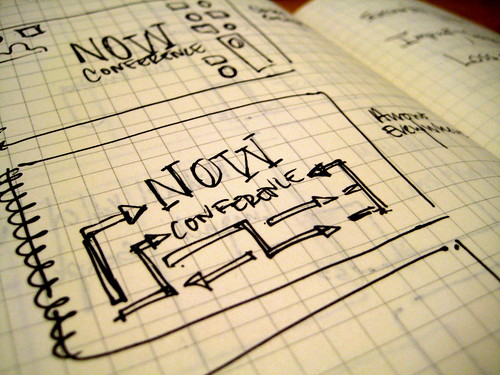 If you’re interested in attending the conference, it will be this weekend, April 15th and 16th at Brentwood Baptist Church in Brentwood, TN.

You can register online or check out their blog if you want more information, first.

The speaker line up is quality:

Definitely my favorite photographer. We’ve never met, but we have a lot of mutual friends. I first heard about Jeremy when I was in college. Since then, he has gone on to take most of the Christian Band photos, gone back and forth between here and LA doing all kinds of shoots, as well as done humanitarian projects for Haiti, Africa, and started Help Portrait. Its so refreshing to see other artists using their skills for good and not evil.

I’m really excited about meeting Jen.. I worked through one of her Bible Studies a couple of years ago. She is one of the few authors in life that can truly make me laugh out loud.

Jon is hilarious. He is the author of Stuff Christians Like. He started his blog, nine days later, he had 4,000 hits! That type of following is almost unheard of, at least, not within first two weeks! His book makes fun of the stupid stuff believers do, but always with a point. Side hugs? Power key change in worship songs?

Pete is a pastor of a church, here in Nashville. I’m currently in the middle of his book, Plan B. It’s all about what you do when life doesn’t go the way that you planned. I think every college graduate should read this book. There are plenty of things they don’t tell you when you graduate. Plenty of unmet expectations.

The ironic thing about this book: three weeks after the book was released, we experienced the Flood in Nashville. He and his church had the opportunity to live out this book’s message.

Matt has a fantastic story. His wife gave birth to a son that they were told would only live 5 minutes. However, he ended up living 99 days. Matt made a video that serves as a letter to his son, telling him all the accomplishments and things that he was a proud father over. His son lived for 99 days. At his funeral, they released 99 balloons: one balloon for every day that he lived. From that, Matt started a nonprofit, 99 Balloons. You’ll need a box of tissues when you watch this:

99 Balloons from Igniter Media on Vimeo.

There are plenty more speakers, but these are just some of the ones that I havne’t met and the most excited about. I’m shooting pictures at the event, so I should have more stuff to share next week.